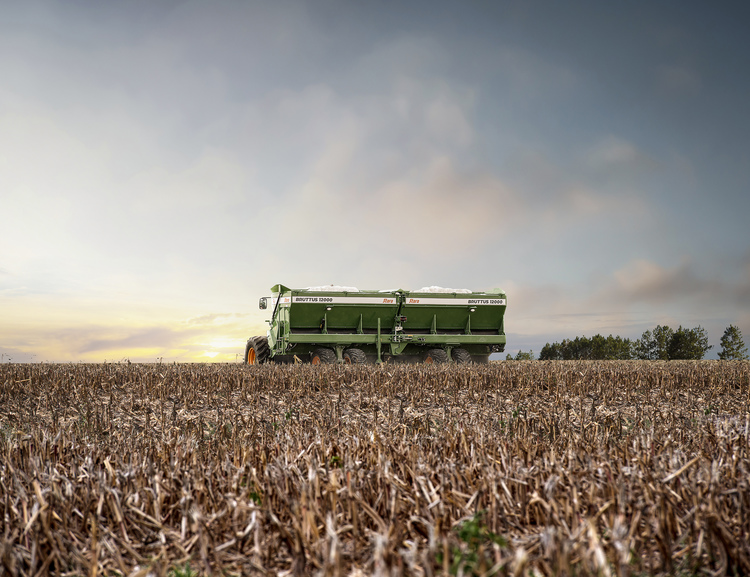 Combining tradition and innovation, Stara provides you with another novelty to the spreading line, the new Bruttus 12000. With a new design, it guarantees absolute precision and uniformity in spreading by gravity substances for soil regulation and fertilisers, being the only one in its category that is transportable.

The new Bruttus 12000 is equipped with a hopper of up to 12,000kg capacity, which provides great operation autonomy. Tilting hopper that features protective grille pieces that are hydraulically driven, which eases their cleaning process. Additionally, it has side and front flanges, which prevent product waste during loading, and inner agitators that prevent product build-up on the hopper walls.

The application height is 1.25 m, and the application range of the new Bruttus 12000 is 6.7 m, which provides high operational efficiency and speed range, keeping the spreading quality.

To ensure greater terrain copying during spreading operations, the new Bruttus 12000 features two wheelset systems. These wheelsets are mounted beneath the hopper, which eases access to the loading process. On the other hand, the tyres with high-pressure fluctuation prevent the soil from becoming compacted.

The new spreader by gravity from Stara can operate with variable rate. Product metering is automatically adjusted through the PWM System, as the recommendations from the application map imported to Topper 5500 SL controller.  The new transmission system comprises only one sprocket wheel assembly for all desired application rates.

Besides being the only transportable spreader by gravity on the market, the new Bruttus 12000 has an articulated chassis that makes the spreader 3.18-metre wide, making it easier to cross narrow roadways and bridges.