“Working all these years at Stara is extremely rewarding”. 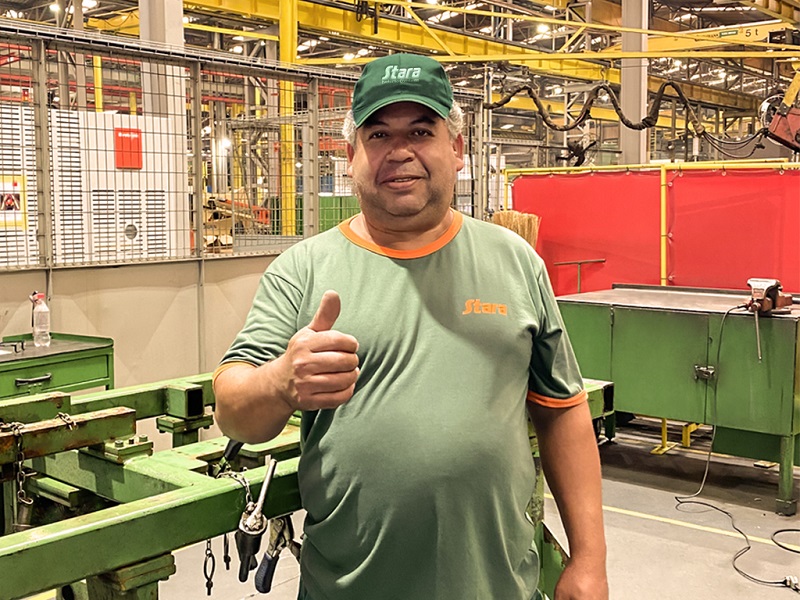 “Here, we are a family. Working all these years at Stara is extremely rewarding”. These words were said by João Cláudio Camargo, who has been working at Stara for 28 years, growing together with the company. He used to work in a repair shop, but he was looking for new opportunities to grow. “When I started working at Stara I was terrified, but that’s what I wanted: an opportunity. Here, some of my dreams have come true, I finished my studies, bought my house, my car. I have grown together with the company,” says João.

João Cláudio remembers how different the company was at the beginning of his career: “When I started, there were 100 employees, everyone knew each other, now it’s a lot of people.” Technology was other. “I started as a painter’s helper, back then there was no decal, it was all handwork. I would put on a face mask and take a little gun, put it on the implement, and then I would paint Stara’s name on it. João Cláudio also worked in the Welding Department and then went to the Tooling Department, where he’s been working until today.

For João Cláudio, one of the most remarkable moments of his career at Stara was when the third and fourth generation of the Stapelbroek-Trennepohl family took over the management of the company. “From that moment on, Stara started to grow more, it was on the right track. It was like turning on a light and coming out of the dark, it brought security to us, the employees. Mr Gilson Trennepohl told us to believe him and his family that everything was going to be alright. Stara started to evolve, the employees had more growth opportunities,” he points out.

The exchange of knowledge is constant. João Cláudio says that he has always shared everything he knows and has never been afraid of teaching someone else and losing his position. “They ask me to teach them, but you learn a lot from them, it’s a rewarding exchange of knowledge You don’t know everything, you never will. What I know I try to pass on, there is no point in keeping it to yourself”. João Cláudio highlights that he gets very emotional when he meets friends and co-workers who say ‘you taught me’: “It’s so rewarding, there’s nothing better than that,” he reveals.

João Cláudio says that the evolution of technology is exciting and surprising. “I could never imagine that the factory technology would reach that point to develop the machines as well. When I started it was all simple, now the systems have all evolved. Today, overnight, you have a new technology. It’s almost terrifying how much it’s evolving,” he says after working with so many different technologies.

João Claudio is proud to see a Stara machine operating in the crop field, after been dedicating so many years to the company: “It’s a little bit of you that’s there, the slightest bit, you helped in some way.”  João Cláudio expects the company to continue growing: “We are going to become the world’s top 10 in the sector, and I intend to continue working here for at least another 10 years.